After launching cartooncache.com last month, I began thinking about what my very first blog would contain. The following isn’t what I had in mind. At the start of November I opened a month-long exhibition of my cartoons at a popular downtown Bloomington, Illinois eatery. Three days after my show began, the restaurant owners told me that following complaints from several patrons regarding the “anti-religious” content of my cartoons, I had until the end of the week to remove all my works from their establishment – where I’d shown similarly themed cartoons on two previous occasions.

In truth, I wasn’t wholly surprised, and wasn’t as disappointed by this development as I would’ve been had this happened during my 2012 debut exhibition. Two thoughts occurred to me in light of what the restaurant owners told me. First was a suspicion that those who objected to my cartoons criticizing Christianity, decried what Islamists did in Paris on January 7th of this year. Second was a frustration that for the remainder of the month, non-complaining restaurant-goers wouldn’t just be denied an opportunity to view cartoons critical of Christianity, but also ones that lament the Holocaust, along with those that discuss important issues of the day such as money in politics, abortion, gay rights, racism, civil liberties, and Islamic extremism, to name just a few. Interestingly, the curtailment of my exhibition followed a decision by Mattoon High School (1.5 hours away) to pull Jonathan Safran Foer’s novel, “Extremely Loud and Incredibly Close” from its bookshelves.

What has truly surprised and disappointed me during the past week is the total lack of support I’ve gotten from Bloomington’s art establishment, (members of which I’d emailed upon hearing from the restaurant owners) apart from the very few establishment members I enjoyed a dialog with prior to this affair, to whom I’m extremely grateful. The week ended with me attending an inspiring Bill Maher concert in Champaign, Illinois where I gave his people a framed cartoon to give to him. What Mr. Maher (and those non-progressive Bloomington restaurant-goers) gave me is an even greater determination to challenge the forces of ignorance. – Darren Humphreys

Below is one of the cartoons that recently riled a few downtown Bloomington, Illinois restaurant-goers. 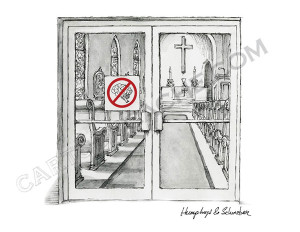 Below is the cartoon I gave Bill Maher. 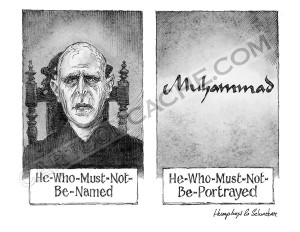